KNOW YOUR SUBDIVISIONS: KONNOKOL the BASICS

Today we are going to start with the basics. Counting with Konnokols, which is the South Indian term for singing rhythms, a language of the vocabulary of rhythm if you will. We will learn the South Indian Konnokol as well as a Western version I have developed and we’ll do so for subdivisions from 8th to 36ths notes.

“Know your Subdivisions” why so Important?

So why “Know your Subdivisions”, well if time signatures are the canvas; then subdivisions are the paints we use to create the artwork. So it’s crucial to have a thorough knowledge of these subdivisions and how to apply them. This will enable you to develop a broad and tasteful repertoire of rhythmic phrasing and apply it to any style of music.

We will use two mediums to achieve this, a written medium, but primarily an aural medium or system of counting. The aural medium is primary because it allows us to really and most directly internalise rhythmic phrases using our voice, which is our primary or root instrument.
If you can count or sing a rhythm then you can play it, but if you can’t count it, no amount of reading will enable you to play it.
Singing and counting rhythm therefore in my opinion should be the first process any aspiring musician engages on his or hers musical journey.

Why not just learn The South Indian Konnokol?

South Indian Konnokol is probably the most complete system of rhythmic phrasing that exist today as a holistic language; there is no Western equivalent.
However because my aim is to teach within a Western drumming context, I also developed a Western Konnokol to address the ambiguities and deficiencies that currently exist in our Western tradition of counting rhythm.
Just as the Indian Konnokol language relates to its specific drums, we also need a system that relates specifically to our Western drumming tradition. However it is still very worthwhile to learn the South Indian Konnokol as it crosses over powerfully in our Western context not only for drummers but all Western instrumentalists and singers.
Today we will learn both these Konnokols which we will apply in different ways in part 2,3,4,and 5 of this series.

What is a subdivision?

So getting back to subdivisions what are they?

Lets approach subdivisions through our Western music theory, which extends into our notation system first developed through Gregorian chant.
Dealing with choirs in the 13th century, thinking about a written transcribing methodology for this choral music, the musical context was more concerned with note lengths then rhythmic structure. Gregorian chant does not have complex rhythmic syncopated phrasing. Therefore our notation system developed based on how long a note lasts, not its place in time. How long a note is and where it ends determines where the next note starts in the timeline. So a timeline with five horizontal lines called a staff was created to determine the pitch of notes; it was broken up by vertical lines, creating box like sections, which we now call bars or measures. If the entire space of a bar is filled with sound, we have a whole note, because the whole space of the bar is filled. If the space is divided into two equal sections we have two half notes, that make up the whole, if the whole is divided into four equal sections, we have four quarter notes that make up the whole.

These quarter notes became the source of our most common time signature 4/4, meaning four notes per bar with the length or value of a quarter note each, counted simply 1_2_3_4_

The subdivisions are created by further dividing the quarter note pulse. In 4/4 time, if all four quarter notes are divided by two we now have eight notes per bar, or 8th notes, counted:
1 A 2 A 3 A 4 A.

There is one other subdivision, which is to only play every second note of the 12th note or triplet subdivision starting on or off the beat in a bar of 4/4 time which gives us, six even notes over four quarter note pulses, traditionally called quarter note triplets which I call 6th notes. These nine subdivisions and their varied application make up 90% of the musical content of all traditions on our planet today.

These nine subdivisions are the focus of this series, today we will just focus on learning the Konnokol syllables both Indian and Western for 8th notes up to 36th notes, as the 6th notes syllables will be sounded the same as 24th notes. 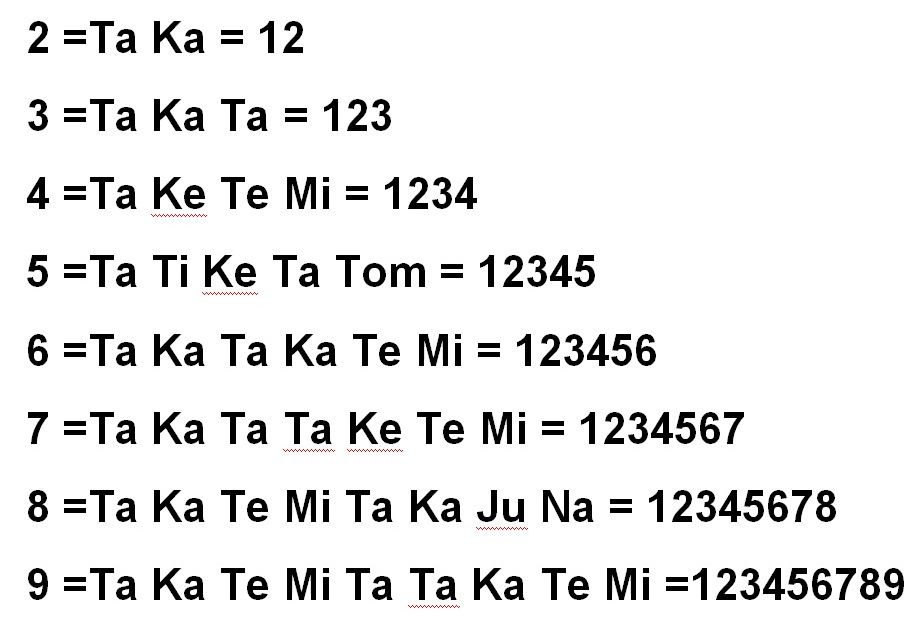 In the South Indian system the name given to each group can can be used to represent a subdivision, but also just a group of notes within a subdivision, no numbers are ever used to count, and all the syllables relate to specific strokes or sounds on its three main drums: the mridagam (a two headed drum), the ghatam ( a clay pot) and the kanjira ( a small frame drum). 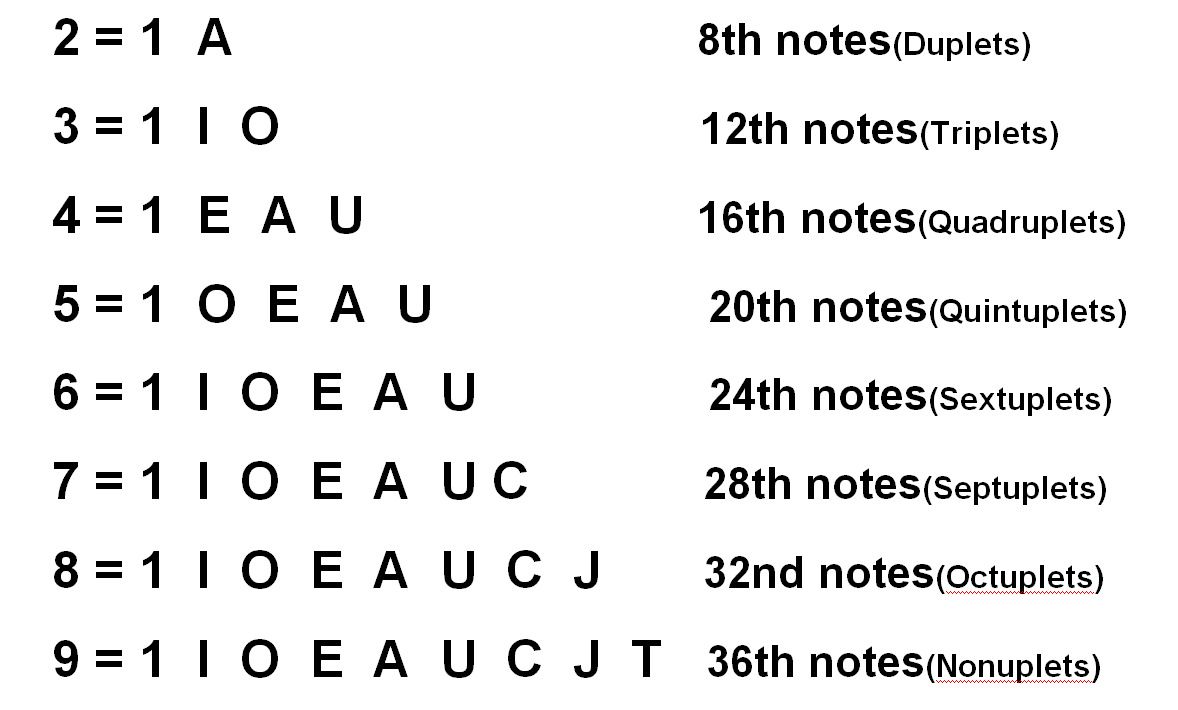 You should familiarize yourself with both Konnokols and commit them to memory such that you can speak, sing or count them fluently and confidently. In the next 4 tutorials we will learn how to apply them and sing them as subdivisions, and as groupings over or within any given subdivision, which I call “alternate phrasing”; and we will do so firstly clapping quarter notes in 4/4 time, and then clapping more elaborate claves which relate specifically to each subdivision, as they do in South India.

Once this preliminary work has been integrated, we can then move on to applying these subdivisions to the drum set.

Before the next tutorial can be of benefit, it is important that you are utterly familiar with both these Konnokols otherwise you will not be able to proceed. I also recommend you read these two very useful posts I wrote on The Quorn’s Drumming World Blog which you can access with the following links: