ELECTRONIC and ACOUSTIC DRUMS are comparisons even relevant?

If you put a bunch of drummers in a room and the conversation topic of electronic percussion came up at some point you would no doubt hear: 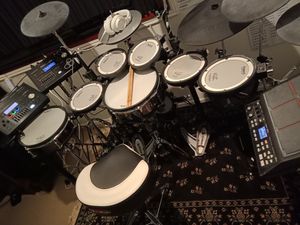 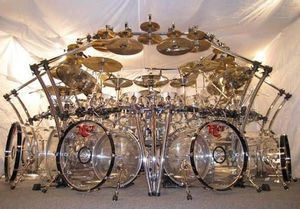 Well even though I am approaching this from a different angle, this is exactly the focus of this post. My point is that comparisons are not relevant and here’s why.
When one looks at electronic drums they appear to be exactly like an acoustic drum set, they have a snare drum, bass drum, toms,      hi-hat, cymbals; they are played with sticks, and used for the same purpose, to express one's self creatively in a musical context.

However they are a different musical instrument, much like one could say an electric guitar is a different instrument to an acoustic one. We don’t question the legitimacy of an electric guitar over an acoustic one. This however is not the case with electronic drums, they have not quite gained this cultural acceptance yet, though now in 2021 this perception has changed extensively.

The issue of legitimacy is obviously real, otherwise we would not see this ever growing trend of certain manufacturers of electronic drums making more and more sophisticated electronic drum kits using traditional drum shells and finishes achieving a remarkable if not indistinguishable likeness to an acoustic drum set. Even electronic cymbal these days have been made from alloys that have the same look as acoustic cymbals. 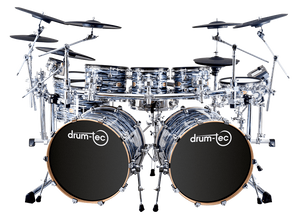 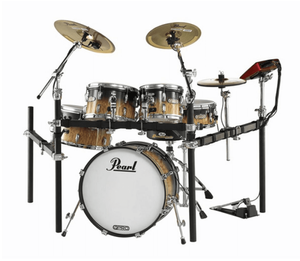 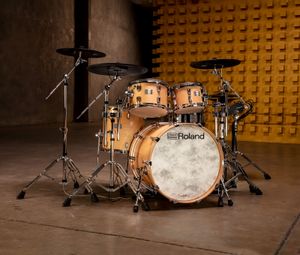 There are two reasons for this trend, one deals with addressing an issue to do with how drummers themselves may feel, there may be various reasons, technical or aesthetic, that would make a drummer more comfortable sitting behind a traditional acoustic kit format even though actually a fully electronic instrument. For this reason the use of electronic triggers to supplement acoustic drum set ups have also been popular giving an acoustic drummer potentially the best of both worlds by staying behind their familiar acoustic instrument while also being able to access the electronic world and all that it offers.
The second reason is more about the perception of an audience accustomed to seeing how an acoustic drum kit may look on stage, so that they will feel familiar and therefore comfortable. Beyond the audience's visual sensibilities however, this may also address issues about them feeling that the drummer is playing an authentic instrument, and that therefore he or she is him or herself a genuine musician, because it may be perceived that playing an electronic instrument is less legitimate or easier, like a singer using auto tune.

Considering the amount of sampled percussion in today’s popular music this seems a bit ironic, and maybe the eyes of audiences need to catch up to what their ears have been accepting for many decades.

The evolution to the electric guitar was much more immediate, easier to accept because with the invention of the pickup and amplifier, the electric guitar worked immediately with no tracking issues. This has not been the case for electronic drums which uses a much more complex technology requiring samples and the triggering of those samples. For a long time the tracking was clunky, imprecise, machine gun like and did not keep up with the demands of a drummer who plays rolls and eats 32nd notes for breakfast. Also drum kits are made up of two different instruments, drums and cymbals, the cymbal aspect of the instrument suffered terribly for a long time, with the colours, dynamics and tones we find in cymbals being utterly superficial.

However since January 2012 with the advent of Roland releasing its Supernatural series and in particular its flagship TD-30 module a bunch of serious musicians showed up on video on Roland’s website giving legitimacy to electronic drums as an instrument.

When Chad Wackerman of legendary Frank Zappa and Allan Holdsworth fame says of the TD-30: “I’m getting everything back that I’m putting in” you have to sit up and take notice.

See what Chad Wackerman says about the TD-30 Roland VDrums at 6.00 minutes:

I think the issues relative to electronic drums being able to function like an acoustic instrument on ninety per cent of its range are behind us. Therefore the ground that existed before, where one would be constantly comparing electronic to acoustic because of the tracking, realism and smoothness issues in the electronic medium are behind us. Well this is great news!

Have a listen to this mp3 of this jazz tune, especially pay careful attention to the ride, how it has that Paiste dark ride Jack De Jonette sound, and the overall quality of the cymbal sounds, can you pick that sizzle sound in the mix coming from one of the crashes? Its jazz, does one play jazz on an electronic drum set? can it be done?

When I got my TD-30 module and recorded this track I myself was blown away, after thirty years of playing drums if I closed my eyes and pretended listening as for the first time; I would not have suspected I was listening to anything other than an acoustic drum set, in part because of the richness of the ride sound. So for me the comparison between electronic and acoustic drums is obsolete.

The advent of Roland’s TD-30 module and Roland’s new SP snare and tom pad and VH12 series hi-hat pads puts all these comparisons to rest, because all the issues, or objections one may have had previously relative to electronic drums are a thing of the past. Fast forward to 2021, amazing development in chip technology in the last five years had a profound impact on electronic drum tech. Roland released the TD-50 in September 2016 and it would prove to be  game changer, because it included a new digital technology for pads with extra sensors connecting via USB cable for both the PD-140DS Digital Snare and CY-18DR Digital Ride giving an extra dimension of fidelity, expressiveness and therefore to overall musical creativity then had already been accomplished with the TD-30.

However, for me it was not till June 2021 when Roland brought out the upgrade for the TD-50 to the TD-50X, and the release of the VH-14 Digital hi-hats that the module really sky rocketed into the stratosphere, with a host of other new features, including 500 new sounds, a whole new ambience section, as well as 30 channels of digital audio via one USB cable into one's DAW.
The advent of digital pads with the TD-50 were a huge paradigm shift, I sold my TD-30 module to upgrade, but I must admit  that at the time not being able to afford the digital pads, I was underwhelmed with the TD-50 compared to what I had with my TD-30.
However, upgrading to the TD-50X and acquiring the three digital pads for snare, ride and hi-hats restored my faith in this module because now it expresses its full potential, and I am sure there will be more to come in the future.
The whole experience has been for me a complete paradigm shift even more significant as was upgrading from a TD-20 to the TD-30 module, I could not be happier. Yet, after the massive upgrade to the TD-50X with all three digital pads, I still missed my TD-30; so a month back I re-acquired a second hand TD-30, my set up now included both TD-30 and TD-50X modules, and I must say it has been "the most enlivening musical, technological and creatively invigorating experience of my life". 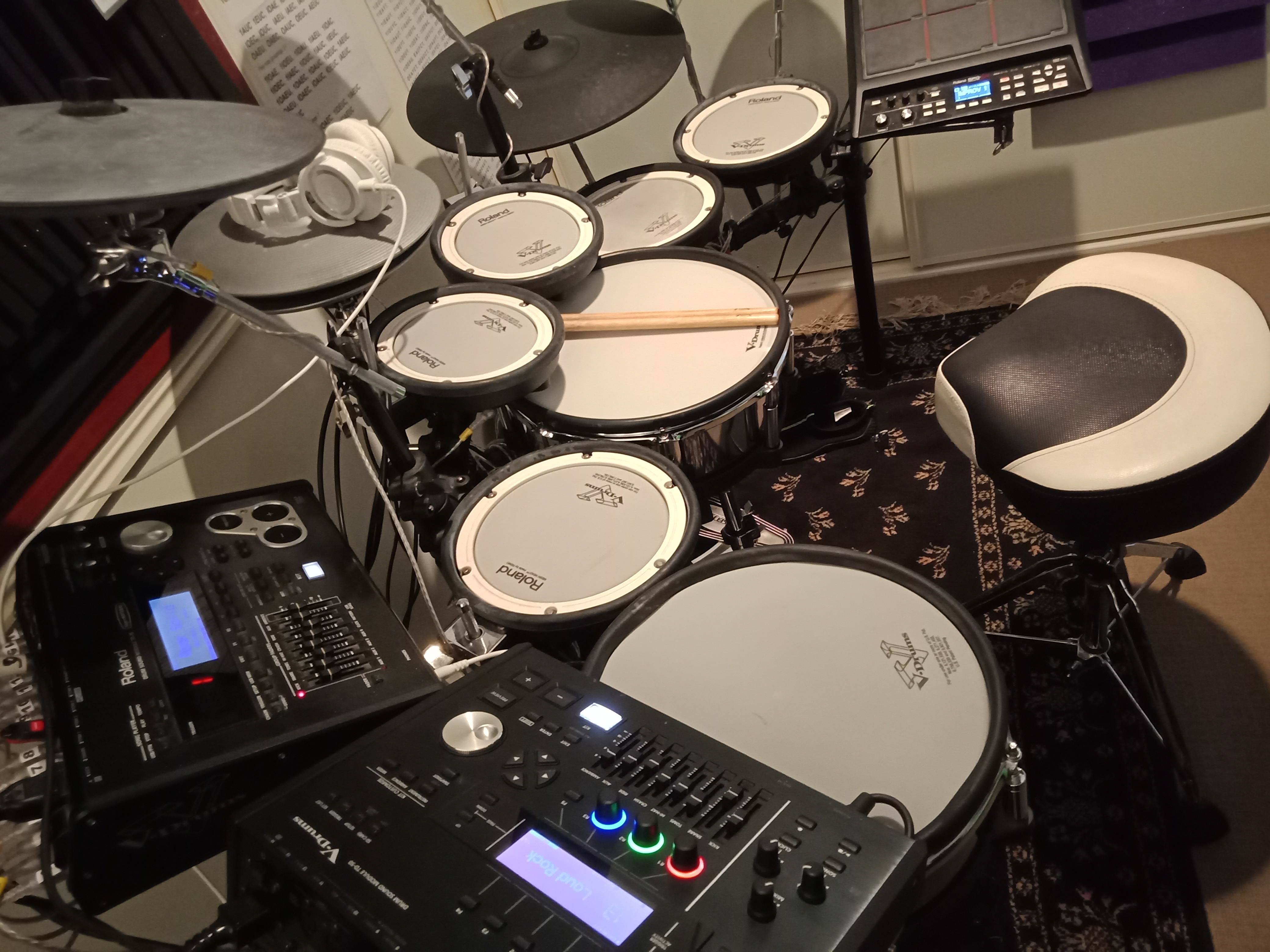 When we look presently with eyes towards the future, we see two unique drum set instruments, one traditional and acoustic, one modern and electronic. Both have unique and individual characteristics.

Electronic drums are so direct and easy when it comes to recording and live work because they are not dependent on the acoustic environment they are in. They function uniformly one hundred per cent of the time under all circumstances, they are simply plug and play, with no microphones or pre-amps required.

They carry a huge number of voices, to create numerous potential drum kit configurations, and all the tools of a studio environment. Both can be edited to create the exact sound the drummer is looking for, giving the drummer full production control. Because of this, their creative potential is enormous, since one can create a different specific drum kit for every song of a set should one wish to. They send midi which is so user friendly and versatile for tracking editing in the studio to use in conjunction with  sophisticated software instrument like Superior Drummer 3. They can function in conjunction with an internal or external sequencer; like Roland’s TD-30 drum modules that carries a general midi bank, which enables sounds and sequences to be triggered from its pads adding a huge dimension of creative possibility. Being quiet they are ideal as a practice kit or for people starting out living in places where noise is an issue. 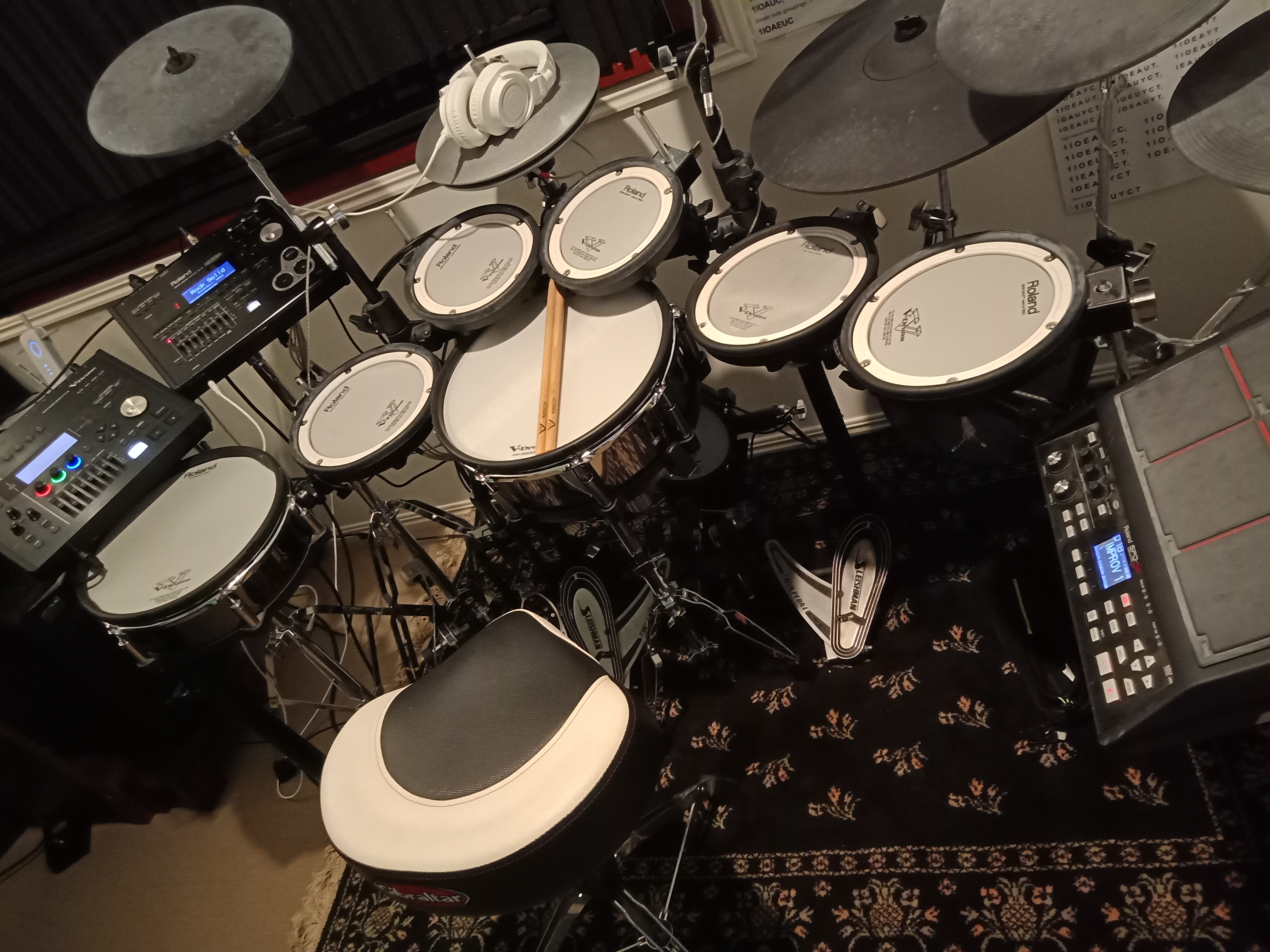 Acoustic drums don’t require electricity, they are immediate, moving sound waves in the room and project absolute dynamic nuance one hundred per cent of the time. As such they require no amplification and are easy for other musicians to monitor. They enable absolute dynamic and timbrel control, with all the voices in the set only limited by the players imagination and technical ability. They are the only thing left standing on a stage to entertain the crowd at a gig when the power goes down! 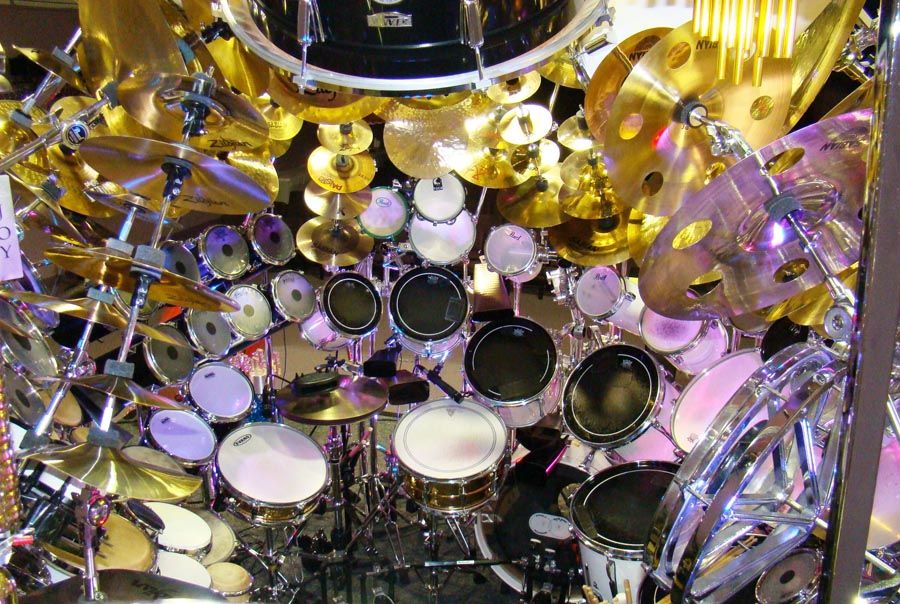 So are comparisons relevant? After all this post started with this inquiry?

Even though I tried not to compare, the above paragraphs seem to at least infer some comparisons, which you would not tend towards using the guitar example brought up earlier. When it comes to guitars electric or acoustic, comparisons aren’t relevant because they are clearly two different instruments. You could only compare aspects about both, but not the instrument in itself.

I think this is the crux of the issue, the whole comparison premise, seems to hedge around the question of whether electronic drums are a true, or legitimate musical instrument?

That seems to be the deeper issue this post is probing. I’ll answer that question right now, “yes, obviously they are”! 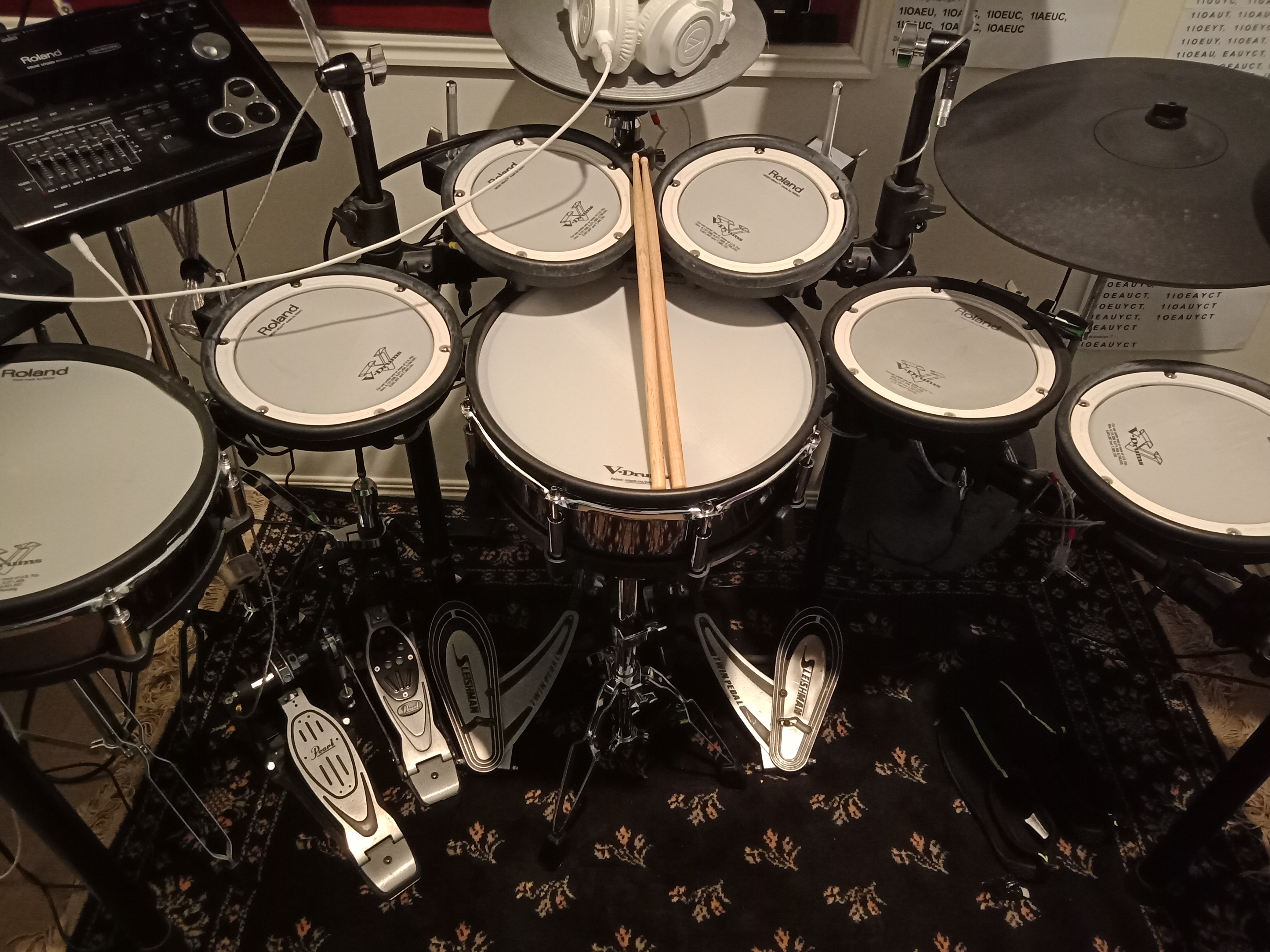 So, like the guitar example one can only compare aspects of both instruments.

Therefore in conclusion I would say this. Electronic and acoustic drums are two totally different musical instruments. They both stand up on their own, with their own sets of unique, individual features and merits. Even though they share similarities, they perform utterly differently, and each require a unique approach in order to be played. You cannot compare them at heart, as if one is superior to the other, it is pointless. 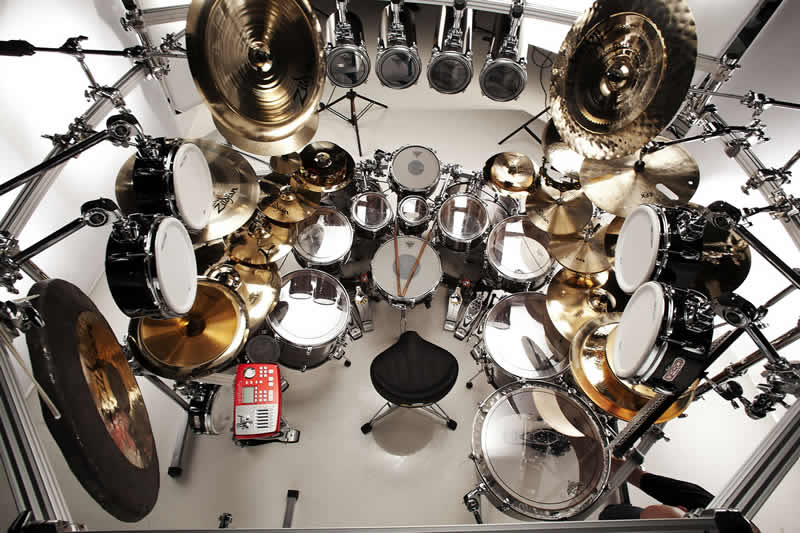